New Declarations of candidacy for POTUS:

Monday, May 4, Carly Fiorina announced she’s in as a republican for the 2016 presidential election. She announced Monday morning on ABC and released a video communicating the same.  Here’s a direct link to Carly’s video announcement.

Monday, May 4, Dr. Ben Carson announced he’s in as a republican for the 2016 presidential election. Dr. Carson made his announcement during an event held in Detroit Michigan. His presentation was relaxed and he felt like a regular guy walking the stage without a podium and all the typical fanfare found at most announcement events. Here’s the event:

Tuesday, May 5, Governor Mike Huckabee  announced he’s in as a republican for the 2016 presidential election. Governor Huckabee held his event in Hope, Arkansas, his hometown. Huckabee is a seasoned communicator with the unique ability to grab your attention and hold it until he’s completed his message. His event captures this perfectly.

More than any other book, it is the go-to subject for news organizations across the country. In addition, social media has gone crazy with it, posting, tweeting and conducting chat sessions every single day.

Here is the summation of the book on Amazon: In 2000, Bill and Hillary Clinton owed millions of dollars in legal debt. Since then, they’ve earned over $130 million. Where did the money come from? Most people assume that the Clintons amassed their wealth through lucrative book deals and high-six figure fees for speaking gigs. Now, Peter Schweizer shows who is really behind those enormous payments. See more here.

If you have read the book, leave a comment on your take. If you haven’t read it, we encourage you to do so.

Number 5  – Carly Fiorina: “The government has become so big, so powerful, so costly, so corrupt, so crushing, in its weight and its ineptitude that only the big, the powerful and well connected can survive.” 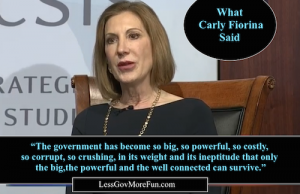 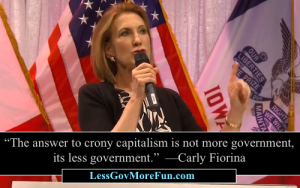 Number 4  – Carly Fiorina: “The answer to crony capitalism is not more government, its less government.”

Number 3  – Ron Fournier said the Clinton team believes trust just doesn’t matter.  “That’s what blows me away, they really don’t think this matters. If you ask the Clinton people as I have, they will say not only does not matter, but trust doesn’t matter. They have convinced themselves because Bill Clinton did beat Bob Dole and did beat Bush with his trust numbers being worse than theirs, they’ve learned from that lesson that Hillary Clinton, her trust numbers can go down as they have in most polls and it doesn’t matter,” 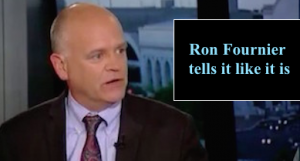 Number 2  – Ron Fournier and his take on the action the Clinton’s have taken regarding the Clinton Cash book:

Number 1  – On May 1, the New York Times released the results of an Associated Press-GfK poll showing that 61 percent of people don’t think “honest” is a good description for Hillary Clinton