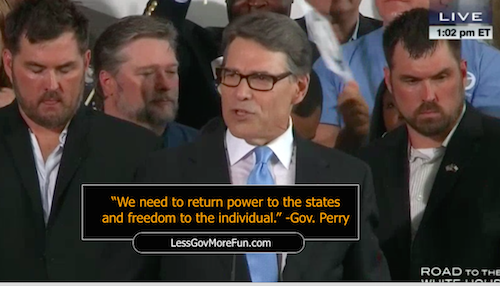 Rick Perry declares he’s in for the 2016 presidential race

The announcement came at 11:30 a.m. today (June 4, 2015) from an airplane hangar in Dallas, Texas. Rick Perry, the longest serving governor of Texas said, “We even made it through Jimmy Carter. We’ll make it through the Obama years. We will do this. The fundamental nature of this country is our people never stay knocked down. We get back up. We dust ourselves off. We move forward. We will do it again.”

Perry was joined on stage with ‘a group of America’s finest patriots’, including Taya Kyle, widow of Chris Kyle, US Navy SEAL Marcus Luttrell, and author Brad Thor.

Perry was born March 4, 1950 in Paint Creek, Texas. He attended and graduated from Texas A&M and served in the Air Force. Perry has an A+ rating from the National Rifle Association.

During Perry’s tenure as governor, almost 1/3 of all new jobs in America came out of Texas. 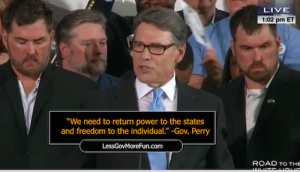 Number 5: “We need to return power to the states and freedom to the individual.” 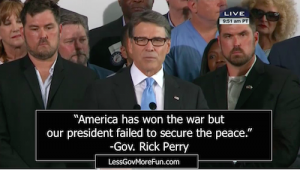 Number 4: “America has won the war but our president failed to secure the peace. 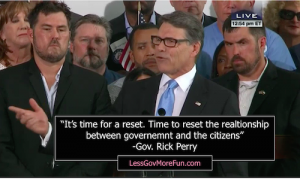 Number 3: “It’s time for a reset. Time to reset the relationship between government and the citizens. 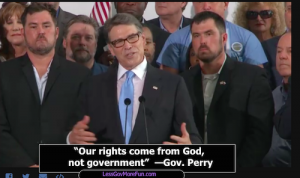 Number 2: “Our rights come from God, not government.” 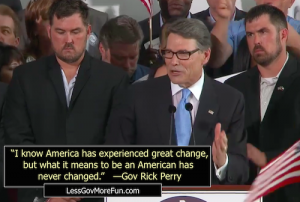 Number 1: “I know America has experienced great change, but what it means to be an American has never changed.”

Governor Perry covered a lot of ground and for a complete view of his entire announcement, go here.

Does Gov. Perry stand a chance in the 2016 cycle? He’s now the 10th official candidate, joining: Ted Cruz, Rand Paul, Marco Rubio, Carly Fiorina, Dr Ben Carson, Mike Huckabee, Rick Santorum, George Pataki, and Lindsay Graham. How are the top two on your list if the election was today? Leave your thoughts. Get engaged. We need to participate or we’ll end up with the mess we’ve had the past 7 years.

• Gov. Perry has appeared in the following feature films: Man of the House, Deep in the Heart, and Hating Breitbart.

• Perry was an Eagle Scout