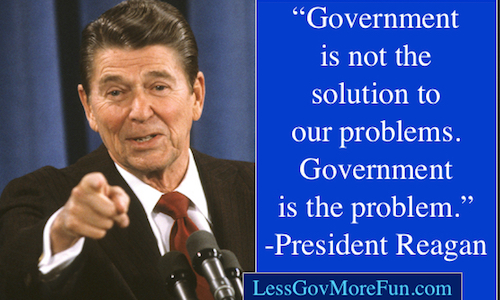 On Tuesday, the progressive poster children united in Washington, DC.

Mayor Bill De Blasio scheduled an outdoor event with liberal politicians, union leaders and celebrities (or celebrity wannabes, Al Sharpton). The purpose was to introduce their vision for a better, more progressive America and to sign a pledge,  guaranteeing their dedication to the cause.

Mayor De Blasio began the session by talking about how its time for Americans to ante up and for the
rich 1% to ‘pay their fair share’. De Blasio said paying more in taxes is something this 1% group owns and owes to America. 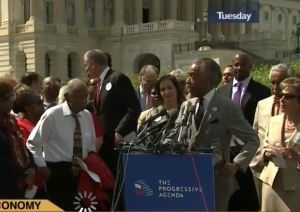 The irony of the De Blasio remarks regarding paying your ‘fair share’ was borderline hilarious. Directly to the left of DeBlasio and in plain view was the bullhorn for racism, Al Sharpton. That’s right. Al Sharpton, ever ready to jump in front of a camera, standing with De Blasio. You must see the mannerisms of Sharpton as he waited for his turn at the podium. He looked, left, then right. Rocked uncomfortably from foot to foot. His impatience was making me uncomfortable. And I’m as far away from a progressive as Los Angeles is from New York City.

Furthermore, De Blasio talking taxes with Sharpton in tow is nothing short of insanity. Sharpton is the guy who owes more than 4 million dollars in back taxes. You just can’t make this up. Not only does Sharpton not pay his fair share — he  doesn’t pay his ‘unfair’ share.

Take a look at the clip contained in the link above to see this event for yourself. While it’s clear the group had put time in for the event to come off well, they are extremely misguided. The answer to so many of the problems in this country, rather real or imagined, is not to give the government any more money or power to attempt solve the problem. We’ve done that for far too long and as a product of human behavior, far to many people end up relying on the government to take care of them. This is wrong and our history proves it.

President Reagan nailed the subject head on. He saw the appetite of big government wanting more 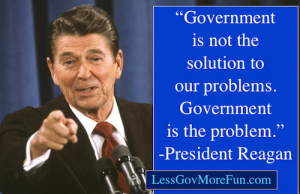 and knew it was wrong. Reagan often said, “Government is not the solution to our problems, government is the problem”. Reagan was right. He saw it and wasn’t afraid to call it out and nip it in the bud.

This approach is the exact opposite of what De Blasio is talking about. He wants government to get even more of your money and for government to distribute it as it sees fit.

Enough is enough. We the People need to voice where we stand. And where we don’t.