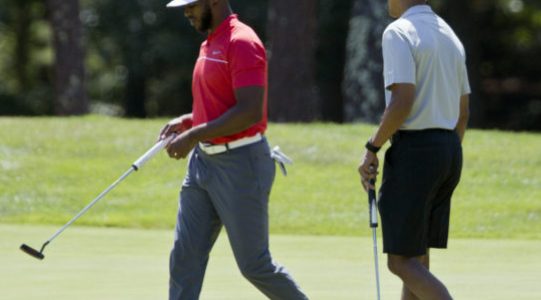 Obama has also spent late nights at restaurants with friends and family and an evening at the home of Robert Wolf, a former UBS executive.

Next week the president will host a DNC fundraiser at a private home on Martha’s Vineyard.

Obama has now golfed over 300 rounds during his presidency.

He has his priorities exactly where he wants them, on Barack Husein Obama. This is exactly what is wrong with #America. Selfish, misguided behavior has no place in the #White House. Tens of millions of voters were unable to see through Obama’s stellar salesmanship and elected him. Twice.

#Golf is a high priority for Obama. For example, he announced to the world that an American journalist had been beheaded. Then hustled to a nearby golf course for a round.

Bush golfed 24 times during his presidency

George W. #Bush stopped golfing immediately after our troops were deployed to hunt down the lead terrorist, Osama bin Laden. President Bush knew what took priority: terrorism over golf. Bush knew how to behave with strength, putting the protection of the United States of America first.

Bush said it would send the wrong signal to America for him to golf while brave men and women were fighting terrorism overseas.

President Obama? Well, we know what he did.

George W. Bush’s inauguration was on January 20, 2001. On September 11 of 2001, the World Trade Center was attacked. And remember who was running the United States for the previous eight years: William Jefferson Clinton. I can make the argument that Clinton’s weaknesses toward terrorism opened the door for the 9-11-11 attack. (I will save that for an upcoming piece).