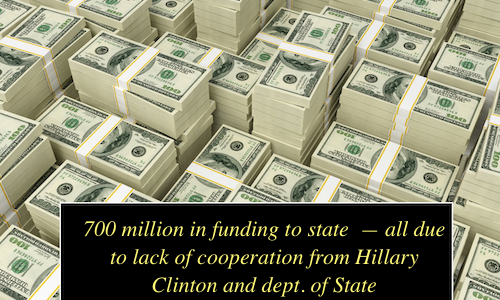 Late Thursday afternoon, the House approved a bill which will withhold over half a billion dollars from the State Department budget. The cause? The ongoing missing documents on the 2012 terrorism attack at the diplomatic consulate in Benghazi, Libya. The House has threatened to do this and today they did. 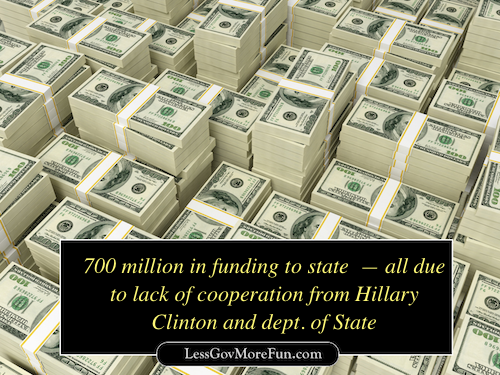 The 2016 fiscal year begins October 1 and that’s when the dollars will be withheld. Earlier this week, the White House voiced concerns over this threat and pointed out that withholding money will impact the department of State. Unfortunately, The White House wasn’t motivated enough to get the missing emails to the House panel. Thus the passage of yesterday’s bill.

The approved restrictions include holding back funds for diplomatic activity in Cuba.

What is needed to release the money to State?

The State Department needs to deliver the requested emails and documents to congress and address the backlog of Freedom of Information Act requests. Once they have, the House will release the $700 million to State.

The fact of the matter is Hillary Clinton used a private server for email communication and repository; and then decided to destroy thousands of documents. Had this not happened and she followed the law, access to the emails would have occurred  long ago and withholding any money would be a non issue.

Although the department of State has provided 40,000 pages of documents and over 300 emails, it isn’t to the extent of the requests from the House.

Rep. Nita Lowey of New York, the ranking Democrat on the subcommittee said, 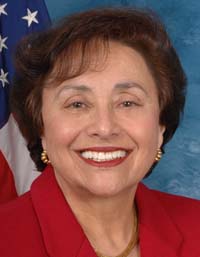 “The proposed 15 percent cut to the State Department’s operating funds if officials don’t feed the sham investigation of Benghazi is simply atrocious”.

Jamal Ware, a spokesman for the Republican spokesman on the Benghazi panel, Jamal Ware, added, “What is it exactly they are afraid the people will find? All this provision does is withhold some non-security related funds until State Department implements a plan to assure policy decisions are transparent to the public.”

The bill does provide resources for security and assistance to a number of countries, including Egypt, Jordan, Israel, Afghanistan, Pakistan and Iraq. It also notes the Palestinian Authority will not receive funding if it continues going after unilateral efforts and the UN and other organizations not included in the previously formerly negotiated peace agreement with Israel.