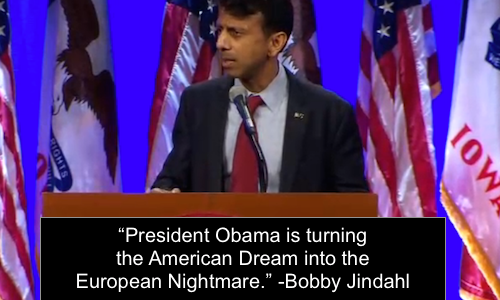 Highlights of Iowa Republican Dinner, May 16, 2015

However, noticeably absent were Marco Rubio, Ted Cruz and Mike Huckabee. The format was terrific in that each candidate had a strict 10-minute limit and that was it. Everyone stuck to the allotted time with one exception: Carly Fiorina. The music came up and her mic went down exactly at the 10:00 mark.

I like the format a lot. All players have the same rules. No filibustering. No lallygagging.

Here’s a highlight from each of the candidates, in order of their appearance on stage:

Rick Santorum focused on foreign relations and jobs. He talked about his experience while serving in the U.S. Senate: “12 years ago I introduced a bill on Iran. To put sanctions in place. You know those crushing sanctions that brought Iran to the table? I was the author that put those sanctions in law, 12 years ago, and I was opposed by none other than Barack Obama and Hillary Clinton in the process.” 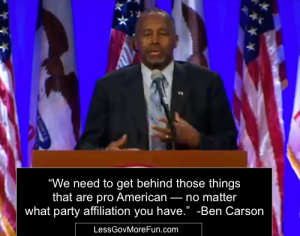 Ben Carson talked about the state of America and the importance of ‘all people’ not just democrats republicans, white, black, liberal, conservative, need to support the right things because — they are right. “We need to get behind those things that are pro American — no matter what party affiliation you have.” 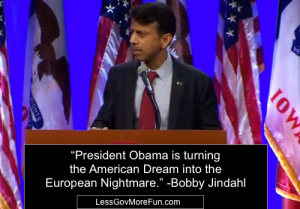 Bobby Jindahl gave the history of his family from when his parents arrived from India to present day. His strongest remarks: “President Obama is turning the American Dream into the European nightmare.”

Jeb Bush walked to the stage with the least amount of applause of all speakers. Not surprising, given the fact this past week it was announced he would not appear for the Iowa straw poll. Bush gave a solid speech on his accomplishments while governor of Florida, particularly his gains in economic development, deficit elimination and decreasing state employee numbers during his tenure. The remark given the warmest applause: “Today is Armed Forces Day and it is scandalous that we treat our military coming home from service in the Veterans Department and the Veteran Administration in a way where people should be fired. One person has been fired. There should be scores of people fired for withholding services from people who need it.”

Rick Perry gave his personal history from farm to serving in the military to the governor mansion in Texas. His statistics on the job growth in Texas during his tenure is impressive. Perry said you can all do a better job with healthcare in your own states than Washington DC can do dictating it to you. “I know for a fact your governor and your legislator will come up with a better way than Washington DC,” said Perry. 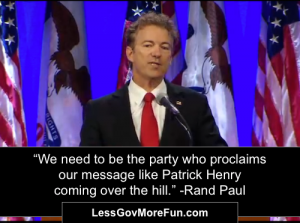 Rand Paul said the republican party needs to go to people who have not been traditionally on the radar. Communities and people who have been ignored by the democratic party. His message was strong and capped off with, “We need to be the party who proclaims our message like Patrick Henry coming over the hill.” 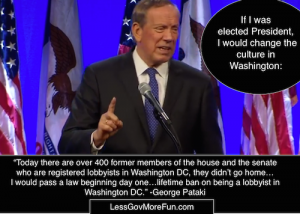 George Pataki  said, “In Washington, I would reduce the size of the workforce by at least 15%…. Some people scoff at this but to them I say, let me tell you I did it…. When I left office we had over 25,000 fewer state workers, that’s 15% less than when I began serving.” 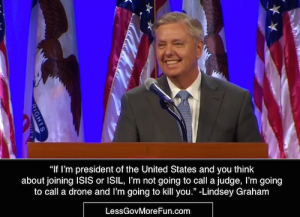 Lindsey Graham is one potential candidate who appears to be out of place. He mixes humor with story and filled in the audience on his upbringing, his service (still serving until end of this month), and mixes it all with a fire and brimstone claim that he’ll make sure all terrorists are killed. 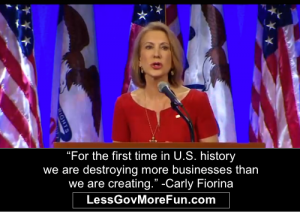 Carly Fiorina tells a compelling story, beginning as an employee at a 9-member company and climbing the ladder to be the first women to lead the largest tech company in the world. Carly is a fresh voice and brings a wealth of experience without a touch of Washington DC. It’s just what millions of Americans are wanting. Carly focused on small businesses and the devastating effect Obama has had on them. They are the backbone of America and the engine that makes the economy strong. “For the first time in U.S. history we are destroying more businesses than we are creating,” said Fiorina. 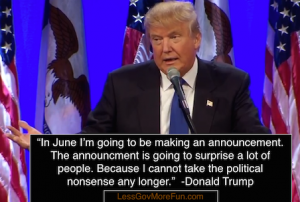 Donald Trump talked of his displeasure with the way the country has gone under Barack Obama. His focus was on jobs and how he can do what is needed to bring jobs to America. Like Carson and Fiorina, Trump brings a breathe of uniqueness to his party. Makes one think about how diverse the republican party has become. Just look at the candidates: backgrounds, heritage, race, sex…this party has it all. The other one? Not so much. Two options and one doesn’t even talk. 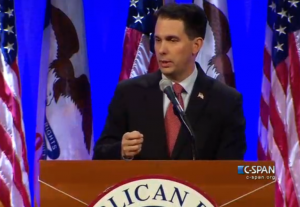 Scott Walker sealed the event as the final speaker. Walker talked about his upbringing, including a story about his Iowa home back in the mid-70’s, Plainfield, Iowa. The city hall didn’t have a state flag so he and his brother created a homemade bank and raised enough money to buy the flag for city hall. “My mother still has that flag,” said Walker. Walker provided substantial detail about his successes in Wisconsin, including victory as governor 3 times in nearly 5 years.

A reception followed the event with each candidate greeting the attendees and posing for photographs. Refreshments were served at each stop and one Governor, Scott Walker, brought along Wisconsin cheeses and served them to those stopping over to say hi.

Click for a direct link to the recording of all speakers. Thank you to Cspan! They do a tremendous job capturing and providing events across the political and governmental spectrums.