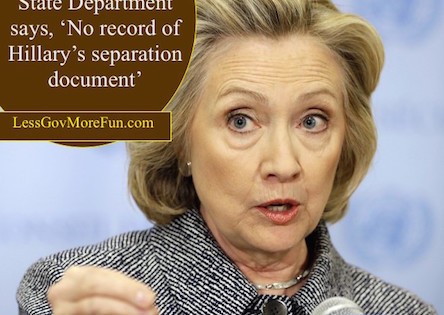 In the last hour we have learned the Department of State, “Has no record of Hillary’s separation document (form OF-109),” per Jen Psaki, spokeswoman.

Let’s face it. We’d be kidding ourselves if any of us thought this document existed. The weaving and spinning the last four days show us just how the Department of State is unorganized and out-of-step.

And the truth is, this is symptomatic of  big government as a whole. When the ship continues to add weight it becomes more and more difficult to navigate and to physically maneuver while on the ship. And our big, expansive government is far worse.

Not only is there so much weight, but the thing has been taking on water. Just yesterday we were told the United States now has a debt exceeding 18 Trillion dollars. That’s a lot of water. And at a weight of 3.48 pounds per gallon of water, this vessel is going down.

What do we do?

Well for one, the U.S. Government must immediately and honestly assess itself and begin plugging the holes in the ship. This will take a long time which is exactly why they should have no more than 100 days to produce a full, detailed report.

Next, collect and dump the water within the vessel. Old wood, dead wood. And with each subsequent retirement, do not hire a new employee. Make do for at least a year when another full audit will occur.

The third and final piece in what we call ‘stage 1’ is to edit the current employee documentation which indicates that no one can essentially be fired. Are you kidding me? This is perhaps the single most destructive thing that has been happening. Any business with that type of rule would be out of business in a New York Minute.

If you agree with this, pass it along and share it. We need to start something yesterday. Tomorrow is even further out than necessary.

Once ‘stage 1’ has been instituted and been followed, we move to stage 2.

And I have to believe had stage 1 happened by now, rules such as signing the ‘separation document’ would have been followed.

But then again, this is a Clinton and sadly, it’s true they don’t follow the rules. However, as bad of a crime here is –no one has held them to account.

Let’s do this now. Reading this, agreeing with this and then doing nothing is exactly one of the reasons we are where we are today. Make it happen. You can do it!