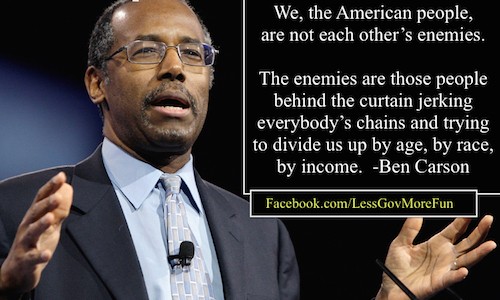 Dr. Ben Carson is set to announce his candidacy for the 2016 presidential run. The announcement will be made official on Monday, May 4, 2015. Dr. Carson will be working hard to get the nomination from the republican field. He is the 4th republican candidate to announce.

Here are the 5 all-time best Carson quotes you need to know — whether you support Dr. Carson or not.

No matter who the eventual candidate is, these 5 quotes are 100% spot on and every candidate should agree with these — if they want our vote. Take a look for yourself and do leave a brief comment on which 2 are your favorite quotes. Or, perhaps none of them are. Either way, your point of view is encouraged and part of the important dialogue our great country needs to get back on track and away from the socialist, big government intrusive mess we’re in now. 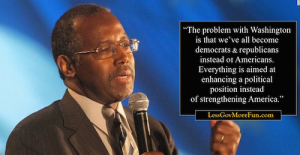 Number 5: The problem with Washington is that we’ve all become democrats and republicans instead of Americans. Everything is aimed at calculating a political position instead of strengthening America.

Number 4: To the parents in Baltimore: Take control of your kids! 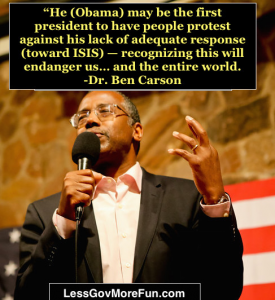 Number 3: He (Obama) may be the first president to have people protest against his lack of adequate response (toward ISIS) – recognizing this will endanger us…and the entire world 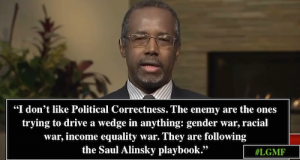 Number 2:  I don’t like political correctness. The enemy are the ones trying to drive a wedge in anything: gender war, racial war, income equality war. They are following the Saul Alinsky playbook. 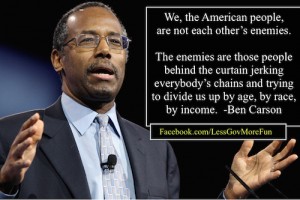 Number 1:  We, the American people are not each other’s enemies. The enemies are those people behind the curtain jerking everybody’s chains and trying to divide us up by age, by race, by income.

Do you have a favorite? The recent Baltimore quote, directed to the parents of the rioters? The guy behind the curtain? Dr. Ben Carson is a breath of fresh air since he’s not cut from the typical political cloth so many are these days.

Here is the direct connection to Dr. Carson’s website for further details on him and his upcoming announcement:

We don’t endorse a candidate, we report on whats happening and where they stand.