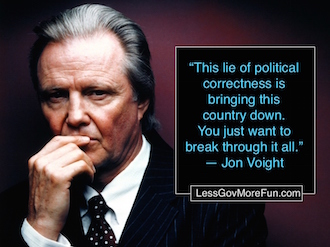 Most larger cities are influential.

New York City is the largest melting pot in our great country and has the swagger, history, languages and cultural influence to prove it. Chicago is the Windy City. It’s  the third largest in the United States and has a Remarkable history: Chicago Board of Trade, blues music, St. Patrick’s Day celebrations.

The second largest city is Los Angeles, filled with diverse communities and neighborhoods, including Hollywood. Known as the heart of the entertainment industry, Hollywood is filled with notable motion picture and recording studios which are responsible for creating what is shown in movie theaters and on TVs all over this country.

Liberals are thought to ‘own’ the Hollywood entertainment industry and those within it. However, there are a few brave enough to stand up to the progressive bloviation. They are genuine patriots, unafraid of speaking the truth, even in the face of the entertainment industry. Thank God for these flag-loving Americans. 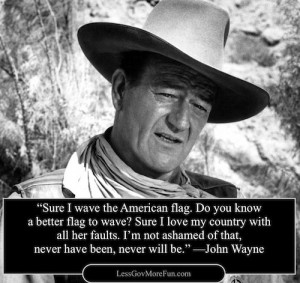 Number Ten — John Wayne: “Sure I wave the American flag. Do you know a better flag to wave? Sure I love my country with all her all her faults. I’m not ashamed of that, never have been, never will be.”

Number Nine — David Mamet: “Obama is a tyrant the same way FDR was a tyrant.”

Number Eight — Clint Eastwood: “President Obama is the greatest hoax ever perpetrated on the American people.” 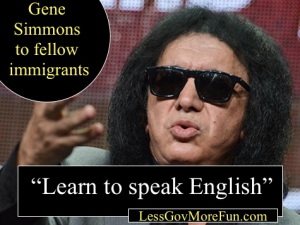 Number Six — Chuck Norris: “I haven’t always been warmly welcomed for holding my conservative positions in Hollywood Then again, I’ve never been very good at being politically correct, either, on or off screen. So why start now?”

Number Five — Clint Eastwood: “I would just like to say something, ladies and gentlemen. Something that I think is very important. Is is that, you, we — we own this country. We — we own it. it is not you owning it, and politicians owning it. Politicians are employees of ours.” 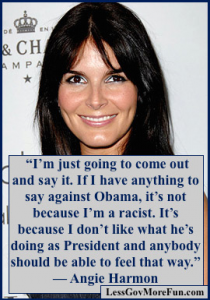 Number four — Angie Harmon: “I’m just going to come out and say it. If I have anything to say against Obama, it’s not because I don’t like what he’s doing as President and anybody should be able to feel that way.” 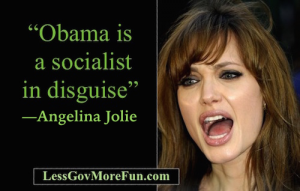 Number three — Angelina Jolie: “Obama is a socialist in disguise.” 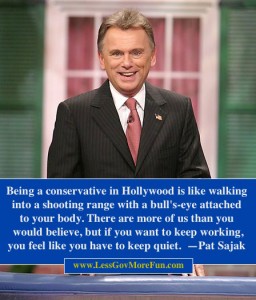 Number two — Pat Sajak: “Being a conservative in Hollywood is like walking into a shooting range with a bull’s-eye attached to your body. There are more of us than you would believe, but if you want to keep working you feel like you have to keep quiet.” 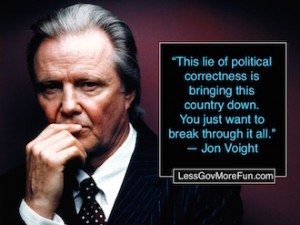 Number one — Jon Voight: “This lie of political correctness is bringing this country down. You just want to break through it all.”

Which quote resonates best with you?